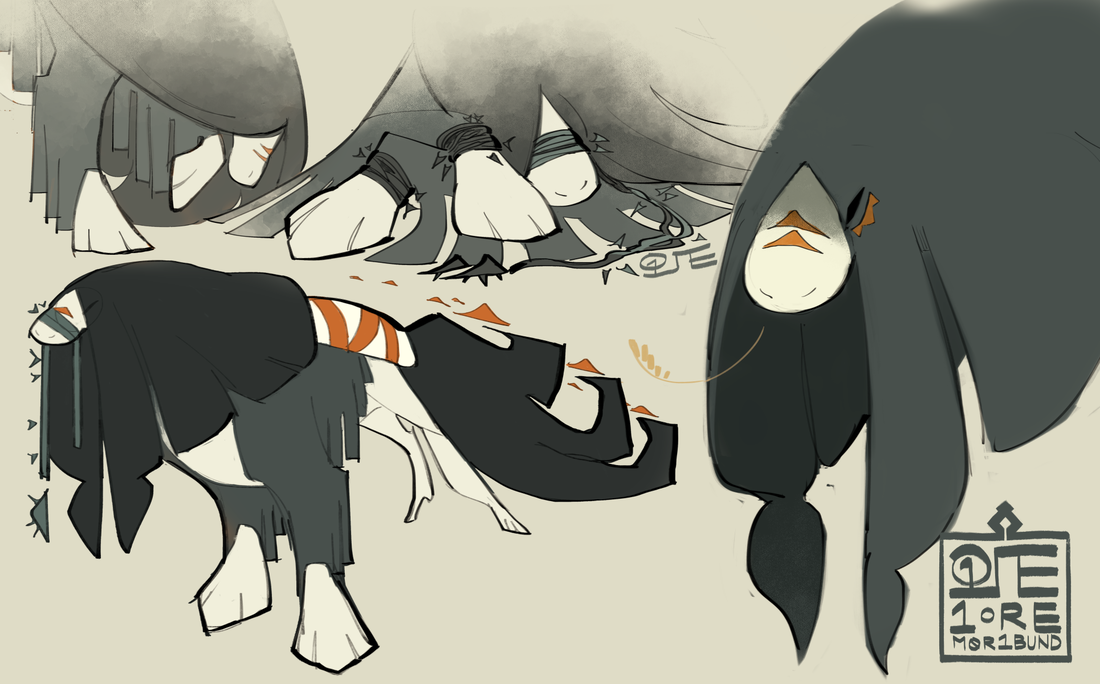 Ora's nature feature, spearleaf, may sometimes appear as cuffs on her wrists. She will always manifest the wrap around her muzzle unless out of biome. Underneath the spearleaf on her muzzle, Ora has a pair of jagged twin scars. Ora has a habit of carrying around different grasses--a habit she retained from life. Feel free to change up the standard wheat with native grasses depending on the area she's in!

The expression of Ora's fire elemental changes as well. Sometimes she may only manifest sparks or smoke, or sometimes her entire fur fringe will engulf in blazing orange flames. Her elemental is most often related to her emotions, but she can control it quite well when calm. It may also integrate into and augment her familiar's forms. Feel free to play with these depictions!

Ora, known in her past life as Denora Walker, was a fierce outlaw and vigilante. Simply known as "Walker" to her acquaintances and enemies, she thundered across the southwest around the turn of the 20th century. Ora was a founding member of the Wild Delta gang, and ran with them until her transformation. Her true passion, however, was disrupting government presence in the southwest, mostly by sabotaging or redistributing supplies, tracking cavalry movement, or aiding native resistance movements when and where she could. She spent a majority of her life as a vigilante vagrant, pulling heists alone or with her gang, and travelling to visit her long-time lover. Ora always felt she was a rambler at heart, incapable of a life settled, but also continually felt at odds with her line of employment. Towards the end of her life, the tethers she sought in each corner of her world began tearing her apart at the seams.

On the night of her transformation, Ora was drawn from her home by the spirit of her best friend, Tex. Though best friends in life, Tex's grief, loneliness, and paranoia caused him to lash out, and in a storm of bitter vengeance, he transformed her. Ora now has an understandably troubled relationship with her creator. Their interactions result in volatile confrontations at best, and devastating wildfires at worst. As of late, Tex has been hanging around her boundary attempting apologies and reconciliation.

Ora feels caged in her coulee boundary. A roamer by nature, having her spirit chained to one place distresses and upsets her. In the beginning, Ora could not gather enough strength to even leave her boundary. It was only through the actions of a feisty little ghost, working to build up her strength slowly, that Ora was able to finally heal and haul out of the coulee. Though at full power in her boundary, Ora attempts to spend as much time out of it as possible. Unfortunately for her, she must periodically return to rest and recharge.

As her memory is intensely tied to physical locations, Ora must journey to across the landscape to uncover memories from her past life. As in life, Ora spends a majority of her eskhood travelling around her old stomping grounds in the southwest. One can find her charging across plains, between deserts, over mountains, and through canyons. For inexplicable reasons, she seems drawn to water but is withdrawn when near it.

In her early days, Ora does not seek out esk relationships. She is too consumed with self-frustration and grief to want to reach out to anyone. Over the course of her story, however, this changes. Ora reconnects with several of her companions from her past life, for better or for worse. Most notable is Blue, her best friend from when she was alive. Blue's presence grounds Ora, and their relationship helps Ora to trust again and open up to more esk. It's also rumored she is intimately acquainted with an infamous vexatious river spirit, though nobody has been so recklessly foolish to ask about their relationship.
​
Ora is an intimidating presence. She exudes an unmistakable quiet intensity that is difficult to match. Her voice is a deep, strumming alto-bass--the echoes of a warm guitar and even warmer prairie nights. She smells strongly of mesquite smoke.

Her familiars represent and externalize distinct pieces of Ora's psyche. They appear over the course of her story incrementally, all sport pieces of her nature feature (spearleaf), and can all manifest pieces of her elemental.

The coyote expresses a multitude of complex emotions, and Ora's relationship with the coyote is complicated to say the least. She continually harasses and torments Ora as the embodiment of her intrusive thoughts and impulses, as well as the voice of Ora's self-deprecation. The coyote's words aren't just frivolous insults, however. She voices the bitter, biting truth--often one Ora struggles to accept or chooses to fight against. The two banter back and forth. Mostly Ora will do her best to ignore the coyote, but she will also argue with her or on rare occasions, listen.

The coyote isn't all negative. Eventually Ora will rethink her understanding of the coyote to encompass more positive associations, like also the embodiment of her wit, instincts, and intuition. In truly trying moments, once in a blue moon, the coyote may offer her a comforting nuzzle, even if she would never voice encouraging words outright.

Her first familiar, the coyote appeared shortly after transformation. Ora is continually surprised that other beings can see and interact with the coyote, as she has been a constant companion since childhood; an imaginary friend turned semi-adversary. The coyote voices Ora's internal thoughts or conveys them through body language by nipping or tearing after people or Ora herself. She appears with Ora's signature spearleaf wrapped around her snout as a muzzle. The coyote thrashes and fights against these bindings, and when she is tormenting Ora, she will appear to have torn through them. Occasionally she may foam at the mouth in thick ashy clouds, or leave trails of ash in her wake.

Her mustang familiar is the visage of Ora's horse that she rode in life--Winona. Winona acts exactly as she did in life: clever, thoughtful, and as a grounding presence for Ora. She appears early-mid story. and at a turning point in Ora's emotional journey. Winona represents the rugged compassion that made up so much of Ora's personality when she was alive, as well as her companionship and trust for others. She is a positive presence in Ora's life, and her appearances often cheer up or act as a constant running companion and confidant while Ora is travelling. Otherwise, Winona can be seen grazing along the ridges of the coulee. Sometimes she may act independently of Ora by bringing people to her or vice versa. Ora's spearleaf is wrapped loosely around her muzzle as a makeshift bridle and reins. Fire sometimes collects at her hooves or in her tail and mane, but more often than not, Winona leaves a trail as smoky as her dappled grey coat.

The swarm of monarch familiars manifests rather late in her story, when Ora comes to terms with the positives of her frequent migration across the southwest. They appear when Ora rediscovers her joy of travelling, and continue to appear when she experiences fluttering moments of happiness. Spearleaf blossoms dot their bodies, and they are often fused with sparks or small, warm flames.

Sometimes the ghost of Ora's previous form will appear. She is an imposing figure. Fire will manifest in the end of her ponytail or in the fringe of her jacket. One may see her even absently petting Winona. The enchantment will act in conjunction with or independently from Ora. The ghost's first sighting was reportedly after a meeting with a lanky and dour river spirit, but none bore witness to the event save for the ghosts involved.

If writing about or drawing Ora, please be especially mindful when portraying Cherokee people, culture, history, and beliefs. In general, regardless of past or present Ora, be vigilant in eliminating from your creations harmful, diminutive stereotypes associated with native peoples, women, women of color, and lesbians.

Ora uses she/her pronouns and is a lesbian. Her identifiers are at the same time the framework for her beliefs and worldview, but also only a piece of her. Do not fetishize her heritage or her identity. I will do my best to portray her with sensitivity, but if I create something that does not follow these guidelines, feel free to privately message me so that we can discuss it. Thank you!

You may create art of Ora freely, but please ask before including her heavily in esk interactions or writing about her. In her early eskhood, she is a tumultuous, turbulent force not to be crossed or reckoned with. Ora travels freely across the American Southwest and occasionally into the West and Northwest. She does not visit the Conservatory.

Currently Ora is not available to be used as a creator esk or for transformations.